Recycling waste is a well-known sustainable action. Many countries have already implemented waste management systems in various areas, from private houses to industrial trash. While the concept of sorting waste is known to many, not a lot is communicated about disposing of medical waste. As there is a lack of awareness about medical waste disposal and recycling, in today’s post we will talk about medical waste and, more specifically, will define biohazard waste and possibilities for safe disposal.

What is biohazard waste

The essential thing to know about biohazardous waste is that it is contaminated. If you are thinking about medical waste, you are correct; medical waste can definitely be a biohazard. Biohazard waste can be divided into four categories. 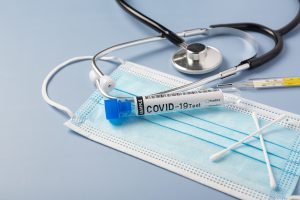 This type of waste contains viruses, bacteria, fungi, and other parasites. It is dangerous because it can easily transmit diseases.

Anything that can pierce through skin counts as sharp material. As this kind of waste is contaminated, it leads to the transmission of diseases. Examples of sharp hazardous waste are syringes, needles, scalps, or broken tubes

This waste contains toxic or deadly cells. For example, in cancer treatments, cytotoxic agents are used to prevent cancer cells from spreading.

Where does biohazard waste go?

It’s crucial to properly separate, collect, transport, and treat biohazardous waste for several reasons. When it’s not sorted correctly, it can contaminate water and the environment. In addition to that, low-income countries have easily accessible landfills, which can endanger communities around them. It can also be an open gate for the usage of contaminated needles and syringes. Moreover, biohazardous waste can contribute to greenhouse gas emissions when not adequately treated.
When thinking about the UN Sustainable Development Goals, the safe treatment of medical waste can contribute to the following goals:

So, it is clear that treating biohazard waste properly is a must.  However, according to the WHO and UNICEF, in 2019, 40% of health care facilities worldwide didn’t separate waste. In low-income countries, this number is even more worrying; only 27% of these countries had basic separation and safe waste destruction services.

These are steam-based treatment technologies in which steam is used to destroy pathogens present in medical waste.

Autoclaves treat medical waste with steam that is introduced and removed from a vessel. This is an environmentally friendly way to treat waste because it releases no greenhouse gases. The only downside of autoclaves is that the air evacuated needs to be decontaminated to avoid health hazards.

Microwave technology is also about steam. Moist heat and steam generated by microwave energy treat the waste. Microwaving technology is one of the most environmentally friendly technologies to treat medical waste. This technology emits no greenhouse gases, and the wastewater is decontaminated during the process.

Such a technology can be combined with methods like shredding to reduce waste volume. After the microwave waste treatment, the materials that cannot be reused can go in the shredder.

In this video, you can see how sinTion, a technology that combines microwave and saturated steam, works to disinfect biohazard waste, including sharp waste, while shredTion transforms it into general leftovers for further utilisation.

Frictional heat treatment is used to destroy biohazard waste. The heat is generated by friction heating the waste up to 150°C and at the same time shredding it into tiny pieces.

In this treatment process, infectious waste is treated with the use of chemicals. This process is automated, and it has to be continuously controlled. The efficacy of using chemicals depends on the characteristics of the waste and the generation of toxic liquid waste. In addition to that, the speed and efficiency of the decontamination depend on operation conditions, type of chemicals, chemicals concentration, time of utilisation, temperature, and other factors. The reactions are corrosive, and the solutions can burn the skin and cause severe eye damage. Therefore, health and safety measures are necessary to protect workers and the environment.

Incineration refers to burning biohazard waste. As you can imagine, the with this process is that when medical waste is burnt, several pollutants are released into the atmosphere. Those pollutants may contain particulate matter, such as heavy metals, fly ash, acid gases, CO2, dioxins, and furans. Bear in mind that dioxins and furans are bio-accumulative and toxic. Furthermore, pathogens can still be found in residues and exhaust gases.

The Stockholm Convention, signed in 2001, recommends using technology that treats medical waste without releasing dioxins and furans. This means that non-incineration treatment is our way to go.

According to WHO, this is the waste-management hierarchy:

In addition to this, the waste should be treated in the same place it was created. By doing this:

The low-heat thermal process seems to be the future of biohazardous waste recycling. This technology is being adopted each day by more countries around the world. Besides, it has proven to be a solution that is good for the hospitals and labs, and the environment.

SinTion and Shredtion, as we showed before, are key solutions that follow the Stockholm Convention 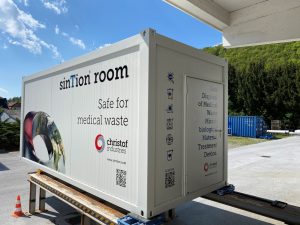 and the WHO recommendations. They can be implemented in loco and treat medical waste without releasing greenhouse gases. With sinTion, it is possible to recover material for secondary use in only 20 minutes. Moreover, if there is not enough space, there is also the container solution option. The container can be easily moved to different places and is fully equipped with both sinTion and shredTion technologies. This is also a key asset for aid organisations and disaster response services.

Learn More About the Container Solution