It is no secret that if we continue living this way, temperatures on Earth will keep on rising, resulting in even more environmental disasters. The plan, discussed in the last UN Climate Change Conference, is to halve emissions until 2030 and reach net-zero carbon emissions by 2050. If we achieve both goals, we can limit global temperature rises to 1.5 degrees. Action is required ASAP. A critical aspect of reducing CO2 emissions is to find green energy sources that can be used and produced without releasing greenhouse gases. Today, we want to talk about green hydrogen, innovative technologies, and climate-friendly processes that will help us drive the decarbonization of the industrial sector.

Many researchers believe that hydrogen is the fuel of the future since it is the most abundant element in the universe and has the potential to be a clean energy provider to all sectors of the economy. Wouldn’t it be practical then if we used it as our primary fuel? Yes, it would. But let’s remember that it doesn’t exist in a natural state on our planet. The way one produces hydrogen defines whether it is a green energy source or not.

Hydrogen can be derived from:

The bright side of this list is that we can produce hydrogen from various sources, making us less dependent on feedstock and improving energy security. On the other hand, when fossil fuels or coal are used to produce hydrogen, we still emit carbon dioxide and air pollutants. 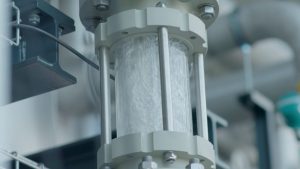 When we look closely at water electrolysis, we can see that this method is a great option because it produces no greenhouse gases. The downside is that it requires more energy. However, the Hydrogen and Carbon Management Austria project, which Christof Industries is taking part in, is expanding the water electrolysis production capacity while using the latest photovoltaic technology (a type of solar energy). The hydrogen produced from a clean source and using clean energy can then be used for electricity generation and for energy-intensive industry, and the surpluses can be stored.

The hydrogen-energy system could be a turning point leaving behind carbon-based energy. But still, what about the other ways of producing it? Can we still avoid CO2 emissions?

There are technologies that allow us to capture carbon dioxide and store it safely (CCS), which avoids releasing it into the atmosphere. With this type of technology, we could still use fossil fuels in a clean way to produce green hydrogen.

As we know, fossil fuel resources are finite. According to BP, oil, natural gas, and coal reserves won’t last long. In Europe, the plan is to switch the usage of fossil fuels to renewable energy systems until 2050. Using fossil fuels to produce hydrogen isn’t a solution, but we could have a more sustainable energy option during this transition period with the carbon capture and storage technology. 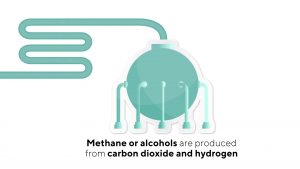 CO2 and Hydrogen can be converted into methane or alcohol by chemical processes.

The HCMA project is also using the CCS technology to avoid CO2 emissions. They use this technology to capture carbon dioxide from industrial waste gases released in cement, steel, and fertilizer production. By doing this, Christof Industries and the University of Leoben are working together to unite the captured CO2 and hydrogen, previously produced by electrolysis, and then to convert them into methane or alcohol. These products can replace fossil fuels, while carbon dioxide no longer enters the atmosphere, closing the CO2 loop in the industrial sector.

By the time we manage to produce hydrogen on a large scale using clean energy and emitting no greenhouse gases in the process, we will have an excellent replacement for fossil fuels providing energy services while bringing great environmental benefits.

Watch the video below to better understand how green hydrogen is produced and how we can manage CO2 from industrial production.